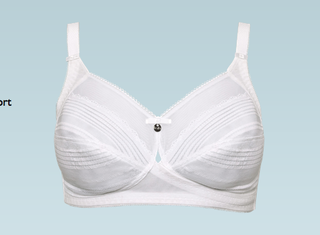 JM: It all started because your mother had these motley bras. She didn't comment on it, the condition of the bras. I said, "That is a motley," and she said, "It's the only one I've got," and I said. "We need to so something about it."

It was early in the morning and it looked like the bra had no tensile strength at all and looked floppy, the whole thing. The straps were ok, but the whole other thing, the cups. They were really motley. Clean. I'm not saying they were not clean. And old. But it was, it was, it was.

CM: Dad has not seen too many bras.

JM: It was Macys. There was NO ONE there. Just one sales lady. So she was really good with your mother. She'd walk back and forth with two or three bras and she found some.

CM: I liked her. She was professional.

JM: I didn't get to look at it in the flesh. I was not into picking the product. I did not feel I had to be in on it. She had a female expert with her. She was very nice. She made me feel very uncomfortable.

CM: I tried them on. I did not parade out with them.

JM: How much did it cost? 40 some odd dollars. That really shocked me. Oh my god. The price. It's cloth. It's small. I thought it was a rip-off. It was just a bra. It's not a pair of pants. You can buy a pair of pants for 40 bucks. These pants. I know because I go to get a pair every time we go to Amherst for $40. I just have never been on buying bras before. I thought it would be more in the rang of 15 bucks. I think they put those frizzly little cloth with holes in it and they make you think it's worth more because of this, but really it's worthless.

JM: A black one came up but I vetoed that. Black is more for a night-time thing and we don't do that. They had tan, black and white. White seemed to down the middle and so we got white.

CM: I do not wear anything see-through.

JM: We bought one. I asked why only one. She said let's see how this one works and then maybe we will get another one.

CM: It's going fine. The problem is I had no bras at the time I needed. I got white because I think underwear should be white.

KM: Does mom have a black bra?

JM: She does have a black bra. Yes, she does. It's her dress-up bra.

CM: No, I do not have a thong. I've never looked into having thong, I've never been interested.

JM: She now has two. One crummy one. One white one. I don't know where the old bra is. What did you do with that old one? I inspected them and they are all padded. I kinda was looking around. Then I sat in this chair. One chair...I thought, "This is where all the guys have to sit." Placed so it is not facing the door. The sales girl brought a few in at time, all white. They had lace, most of it, not the straps. I have no idea why they have the padding. I think it has to do with the appearance of women. I have never heard a padded jockstrap. Jockstraps are to just whole things together. It's not appearance. It's just a functional thing.

There was no one else in the store, so I did not feel conspicuous. There was just the three of us. Then people were walking by and I was just sitting there.I did not really feel nervous about it. I did not feel anything about it really. I was bored really. I have not to the bra department before, not just to sit. I've been through bra departments before, of course.

This interview is over. This was the dullest half-hour I've spent.

Your mother finally came out and said this is the one. So we got it.