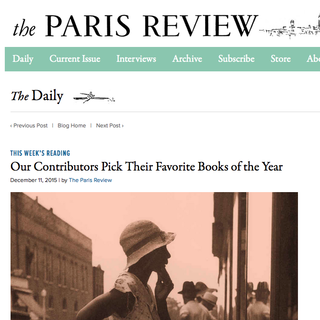 Dec. 11, 2015 --I once sat on a loveseat for several nights in a row, watching a multipart PBS documentary on emotions. What I recall most vividly from this documentary is an experiment conducted on Jason, a young man with Asperger’s syndrome. As he watched a movie, Jason wore a pair of special glasses that allowed researchers to see exactly what he was looking at on the screen. In this way, they could see how Jason processed visual data, and how he created a kind of hierarchy of significance. One scene featured a dramatic and emotional encounter in the foreground—a man and woman, I think, embracing, kissing, whispering endearments—but Jason, as it turns out, was watching the very interesting chandelier in the background. I don’t mean to hard-heartedly ignore or make light of what the experiment reveals about Asperger’s syndrome, but it strikes me that there is an apt analogy here to fiction. This is what good writers do—come at drama indirectly, reverse foreground and background, disrupt conventional priorities, focus on and draw our attention to the “wrong” data. I was reminded of the chandelier when reading the remarkable stories in Robin McLean’s collection, Reptile House . There is no shortage of mayhem and menace in these stories, but they achieve a thrilling and disorienting power by refusing to pay commensurate attention to the life-and-death troubles of people. McLean does not shrink the world down to interpersonal conflict, but instead opens it up to achieve a cosmic perspective that somehow feels both dispassionate and compassionate (Chekhov’s trick). This opening up is wild, surprising, and not a little frightening. I suppose you could call these stories dark, but in their dazzling perspective I find them full of vitality and wonder. —Chris Bachelder The Throwback Special, U.S.! and Abbott Awaits.)

This so rocks. I mean, it's really exciting to know that the Paris Review is still relevant and genuinely up to date. I'd been worried.