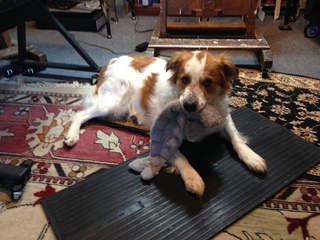 In Sarajevo he lay in the street for three days before rescue. They could not sew his tail back on. He missed his first flight from Germany when the delivery van got the departure time wrong. He chewed up an orthodontic retainer back at the Frankfurt foster's. He made his flight from Berlin the second time.

He was delivered from JFK to a farm on the Old Connecticut, was given marrow bones and slept on the bed. They petted him, brushed him, smeared ointment on his infected nose, counted the missing pads on his paw, penned a letter to the adopting Canadian family: "If you don't want him, perchance, we'd like him back. "

The parting was sad at the farm, but Bob had come to expect departures.

500 miles across New York, snow and cold. "This is Canada," his driver told Bob, "your new home sweet home," swigging down tea after tea.

In Toronto, 20 lb Brutus did like Bob at all, a shy dog with an overbite. Neither did the 5-year old, a sandy-haired boy, who Bob mistook for a sheep. Neither did the fat black cat. Neither did the husband, who left for work at 5 am, a construction site at 40 below. He was reading the farm letter over and over. "'... lots of room,' says here, 'room to run.'" The wife nodded, said she loved animals, said she fed squirrels on the deck from her palm. Bob's driver ate peanuts, watched junior hockey on the couch, which was better junior hockey than anywhere on Earth.

Then the fight broke out: Brutus and Bob, Bob and Brutus.

Bob and his driver slept in the basement.

On the farm, the bed was warm. The Connecticut tried to freeze, but couldn't. The marrow bones were just where he'd left them.

I read this listening to "Passacaglia" from Battlestar Galactica on my headphones, which always makes me a touch emotional, but I read this and was crying and alternately laughing. How do Pearl and Bosnia Bob get along?

Pearl and Bosnian Bob love each other, see each other across the fields and run as fast as possible to a crashing meeting in the snowy rows. LOVE LOVE LOVE