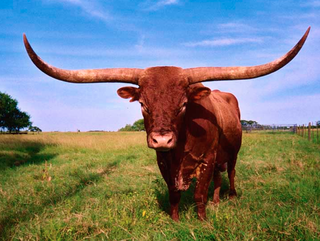 The First in a Series of Farm Stories relating to Corn Fields, Innate Self-knowledge, Farm Boys, Lost and Found Objects,Fast Food as Absolutely Delicious, Make-shift Corrals, the Satisfactions of Instinct and the Love of Privacy:

1. Rosie, the Australia cattle dog, and Pearl, the mostly-always-dirty mid-western mutt, were walking through Mike's Maze on Saturday morning, well before the Public arrived for a day of fun in the sun in a cornfield. Their handler/ dog walker had not realized that the 10+ members of Mike's Petting Zoo had been dropped off and penned at Mike's Farm Yard the night before, under the veil of darkness: a gang of tiny newly-shorn lambs, several fat sheep, a few bearded goats, a shaggy pony and one Huge Texas Longhorn.

2. When they emerged from the corn, the dogs saw the Petting Zoo and knew exactly what to do. They charged the Herd.

4. The Huge Texas Longhorn leaped the fence. He galloped all around Mike's Parking Lot, turning and spinning as the dogs chased him between Mike's tractors, pick-ups, wagons, and other nameless broken-down vehicles, and as the dogs' handler/walker chased the dogs -- calling, threatening to no effect. This scene was all pre-ordained, understood deep-down by all, as the Huge Texas Longhorn was herded closer and closer to South Main Street, an (occasionally) extremely busy street.

5. The Farm Boys, Dave and Kevin, knew exactly what to do. They came running from Mike's Barn where they had been packing peppers. They herded the dogs up into the cab of one of Mike's Box Trucks, slammed the door. The dogs were happy to get in, since they were able chew up all the fast-food wrappers crumpled on the floor, and since they did not, after all, know what to do if they were ever to catch the Huge Texas Longhorn.

6. No longer pursued, the Huge Texas Longhorn knew exactly what to do: he trotted directly to Mike's Corn Silo. He snacked from a bucket as the Farm Boys, thinking quickly, dragged over stray fencing and rotten plywood, thereby making a make-shift corral, where the Huge Texas Longhorn lounged in rare privacy for the rest of the morning, awaiting the Public, as the members of the Petting Zoo looked on with envy from afar.


If you would like to contribute a fish (or reptile) obituary to this blog, please post a comment below with the basics.
Robin McLean also blogs at Mike's Maze.

I must disagree. Speaking as a Texas Longhorn, no job could be worse. How would you like being forced to endure the indignity of being carted around with a bunch of lambs, sheep, goats and a good-for-nothing pony? They are all dumb as stumps. I don't even bother trying to have a conversation with any of them anymore. Plus, they stink like you wouldn't believe. Sure, people are always ogling the horns but I am just so done with that already. I want someone to love me for ME. No one ever checks with me about our schedule. I long to roam free. Why do you think I tried to escape? My day will come.

I think I'm going to be sick. Complain, complain, complain! That's Tex. That's all he EVER does. Poor little me, wah, wah, wah, blah, blah, blah. PUH-LEEZE. Like his life is so tough...someone to scoop his poop and feed his fat trap all day. And he's one to talk about hygiene...you should see the flies on that beast! Always putting on airs like he's smarter than us. We were laughing our butts off watching you guys corral him like that. Oh, his poor bruised dignity!