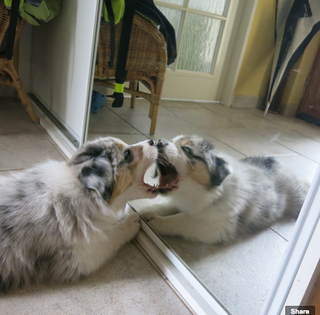 RONNY before he turned BAD. Photo by Rob McLean

The lengths Ronny will go to in order to achieve this aim are impressive. Biting your ankles, for example, is suddenly part of his tool kit. But the main thing is when you bike, he gets a bit ahead of your legs, and if you go faster he will run even faster, beginning to panic that you're trying to get ahead of him. He gives no quarter. He will not compromise on this. Which is fine, except that you don't really trust his intellect at 20 miles an hour and he's running a foot away from your wheel, on a leash. It's self-preservation as well as, well, not wanting to RIP your dog. So you let up, you slow down, and he says to himself, “Mission accomplished.”

And as long as we're Persistently Desiring to Roam Free, I'm curious if he's getting over that urge. A few months ago, when he was half as old as he is now, if we let him loose in the field, he would (persistently) take off, sometimes for 5 minutes at a time. He could see jack rabbits in the distance and he was inexperienced enough not to realize he couldn't catch those critters. Even if he knew, I think all he needs is an excuse to run and he'll do it. Meaning: No rabbit obits to report as of yet. But that was a few months ago when the corn wasn't planted and you could see across the fields. All the corn is now grown and mostly harvested, so we'll see.

If you would like to contribute a fish (or reptile) obituary to this blog, please post a comment below with the basics.
Robin McLean also blogs at Mike's Maze.
Be the first to comment