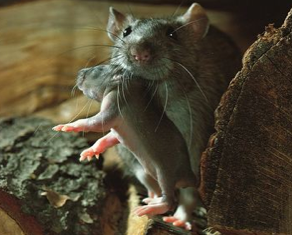 The SECOND in a Series of Rodent Obits. (We expect another from Debbie soon since she knows which one I mean) this one by the mysterious Kate C (who still has not found a pen name) CONCERNING CONFLICT: the Joys v. Perils of New York City, Natural v. Unnatural Deaths, Cockroaches v. Rats, Mice v. Cats, Traps v. Garbage v. Overpopulation, Los Angeles v. The Big Apple , Afterlife v. Reincarnation, and "Everything is just Fine" v. "What's Wrong with People?"

It is with great alarm that I write to report an extremely serious problem happening even as we speak in New York City. There are rats in my son’s apartment. (There is apparently no point in even mentioning the cockroaches, which, I am informed, pale in comparison to rats. Until now, I was unaware of there were degrees of difference between rats and cockroaches on the scale of disgusting things.) The landlord was notified. An exterminator was duly called. Unbeknownst to my son, rattraps were placed in the apartment by said exterminator. Having grown up with cats, he has certainly witnessed several mice die of natural causes, by which I mean cat mauling, but traps were never needed or present in his home. As such, my poor son was blissfully unaware of what said devices were or what they were meant for. (Or maybe he just didn’t give them that much thought, as his mind was probably focused on other New York Things.)

To his great chagrin, he learned this morning that rattraps cause rats to die a slow, excruciating death. You could even call it an inhumane death except for the fact that we are talking about rats. I mean, let’s face it. No one likes rats. It is apparently far more disturbing to see a rat trapped in your kitchen and flailing for dear life than to see one scurrying across your apartment. The problem is that there is garbage in the streets in New York City. What?!! Garbage, they say, attracts the rats. My son, exasperated with the garbage-strewing population of NYC, exclaimed, “What’s wrong with people?!!” What’s wrong, indeed.

Concern about this grave turn of events led me to conducting in-depth rat research, by which I mean surfing the web. It is estimated that there are at least as many rats as people in New York City, if not more; and there are approximately 8.4 million people in New York City. This is truly, let’s just say it, gross beyond imagination. According to the Los Angeles Times, the city of New York has budgeted $611,000 this year for a new program to fight rats. So if you assume there are only 8.4 million rats, by my calculation that is approximately seven cents a rat. It is hard for me to envision how this will solve the problem.


If you would like to contribute a fish (or reptile) obituary to this blog, please post a comment below with the basics.
Robin McLean also blogs at Mike's Maze.
4 Comments

I see from the comment it never stops, this desire to spare our kids the ugly side of it all. Speaking of gross NYC stories, I read somewhere they had to take some subway cars off the line because they were so badly infested with bed bugs.

I vividly remember a radio piece years ago where a fellow challenging standardized testing was saying that the questions were slanted toward middle America and that a question like, "Why does grandma have a metal bed" would be an easy question for inner city kids. The answer was so that the rats couldn't climb it. Shivers for sure. Thanks for contributing to Robin's blog, Kate C.

It is scary thought, rats have alway been a huge problem in NYC and it will continue if the authorities carry on doing next to nothing about it.