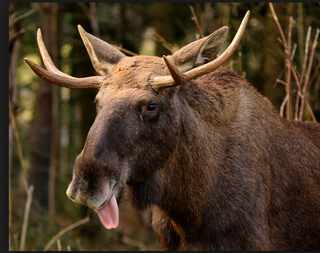 What is it about my car?

So, as you may recall, I work at the North Pole Branch Library which is about 20 miles from my home. As such, my car has a nice uniformly splattered road-grime appearance. Well, on Friday night, I got home at about 8:15PM. It was dark, but I'm pretty sure my car was in its normal state of griminess. The next morning when I was running late for a meeting, I got to my car (it lives about 200 yards away through the woods from my home) and wondered, "What the $%*! happened to my car?" In my paranoid way, I wondered, "Why would someone have done this to my car?" The road-grime had been smeared around all over the car. I looked over at the car next to mine, and it looked fine. Why my car? Why only my car? I jumped in and started it, hopped out and unplugged it (a Fairbanks thing for keeping the engine warm enough to start in the winter), and despite running late, took another tour around the car inspecting this vandalism of sorts. Shaking my head as I hopped into the car to leave, I noticed a small moose print next to the car. Once inside the car, I noticed more acutely that the windows were all smeared too. As I raced off to my meeting, it dawned on me: My car was a salt lick for a moose.

I chuckled all the way to the meeting and made the ladies look at my car when we were done. Later, when I showed my car to a friend, she mentioned this article. So, it seems that there really might be more salt on my car than normal.

So, this in itself is a pretty funny story, but add to it that this summer a bear was seen standing on its hind legs, with it's front paws on the trunk of my car looking into the rear window. This article appeared after that sighting and add to that the enormous bird poop that appeared on my car a week ago, and I have to go back to my paranoid thinking and wonder what is it about my car...

The thing about paranoia is that sometimes they ARE out to get you.