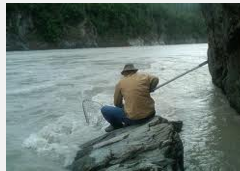 Dipnetting on the Copper

The FIRST in a series of inventive dialogues ON BLOGGING with Robin's cousin Rob McLean, who has almost the same name as her, and Robin's best friend of 40 years, Margaret Eagleton:

Rob: "...I don't see why it wouldn't have to be authentic. Just seems like you need to get over the idea that you totally don't want to do it because that's not 'authentic', it's just a mood or predilection if you know what I mean. If you write it, it'll be authentic."


Margaret: "What about something really fun. Like some kind of blog collaboration or cool writing exercises to make the unconscious come out and write the piece for you. Carl Jung and shit."

Robin: "Yeah, that could be fun. Or fish obituaries."

Rob: "Or take photos of a charming musician playing his violin on an old Gothic bridge in Prague or Rome or downtown Bristol. Then write something sweet and lyrical about the old guy."

Margaret: "Or maybe tell what's happening with Reptile House. The stuff with the cover and editing. People are curious."

Robin: "But I have this poem about a dead fish called 'Fat Oskar.'"

Rob: "I'm not sure about the dead fish part, but maybe."

Robin: "It's from my archives."

Margaret: "I think people are more interested in dead fish than you think."

Robin: "And if people like Fat Oskar, I have tons of other dead fish poems."

Rob: "Alright I see your point. It's also a link to your old days in Alaska."

Margaret: "I think we agree."

If you would like to contribute a fish (or reptile) obituary to this blog, please post a comment below with the basics. DON'T YOU KIND OF REALLY WANT TO?

OR email me at fishobituaries@gmail.com.

Fat Oskar is just as good as Jung, fish and all.

I like this blogging business, how 'bout you Rob?

Tears for F.O.
Yes to poetry!
Say why must we blog?
The houses insist, and the
Friends gladden and read.

Yikes, not sure I like the Death = grey = old age business. I'm steadily greying so... RIP? Darn. I was liking middle age.