Crocodiles in Kitchens & Other Headlines 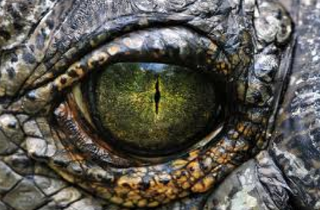 A inventive dialogue between Fish Obituaries editors Cousin Rob, Margaret, and Robin concerning Google Alerts as the Answer to Writer's Block, Treasure Troves, Crocodiles and other Domestic Problems, Loneliness as related to Cruelty, and Succumbing to the Digital Age.

Margaret: We put up the Hula Hoop Interview up. What more do you want?

Robin: I signed up to get a Google Alert any time "Reptile House" appears on Google. It's a treasure trove.

Robin: Here's one from India: "Crocodile-sneaks-into-house-caught-by-forest-officials." Says here, "The villagers then started trying to get the reptile out of the house. They tried to distract it with stones and also hit it with sticks, albeit from a distance, to get it moving, but the reptile refused to budge."

Margaret: We could use that for sure.

Rob: It is an arresting headline, yes, but readers are looking for serious news. The election, the Senate, the Keystone Pipeline.

Margaret: Crocs used to hang out on the golf course near my mom's on Sanibel. Or were they alligators?

Margaret: Oh my gosh. Then what?

Robin: ...Police tried to stick a piece of wood into the Crocodile's mouth... then...

Rob: A stick would never work. Let me see that.

Robin: Hey, back off. Says here, yes, the stick failed... tied up the crocodile with ropes..released in the river...everyone was fine in the end..happy ending.

Margaret: That story has everything.

Rob: I agree, but what about ISIS or a discussion linking our modern obsessions with zombies with terrorism or the whole Ebola thing? We need to challenge our readers.

Margaret: Our readers don't want challenge. They want happiness, like that video of a cat and a squirrel playing like friends. Maybe Putin will watch that clip and get some ideas about peace and learning to be a good neighbor.

Robin: Has Vladimir accepted our Facebook friend request yet?

Rob: Do we really want to be Putin's Facebook friend? He seems nasty.

Margaret: Don't be so narrow minded. Putin's a human. He can change. He has connections.

Robin: And his girlfriend is an Olympic gymnast.

Rob: Yes, but I'm thinking of something exploring our society's deep unconscious fears that fester under the surface of our safe, antiseptic culture.

Margaret: What else do we have from Google Alerts?

Margaret: Sounds a little sad. Why do people do that?

Robin: Ok, ok, here's another. "Pet rescue: Lizard given oxygen through tiny mask as firefighters save reptile from house blaze "

Rob: I could use a little Reiki. My knees are killing me after that marathon.

To become a guest blogger yourself, write a Fish Obituary (or reptilian, mammalian, etc.) to me at robinmclean0@gmail.com or comment below.
4 Comments

If only I'd seen this in time. This is what people really want to read. And what I want my employees to read... http://bit.ly/1ypqPge

Humans are so disappointing. I much prefer the crocodile story, though if I were a boss, maybe...

Is someone going to Canada? Sounds like blog material.