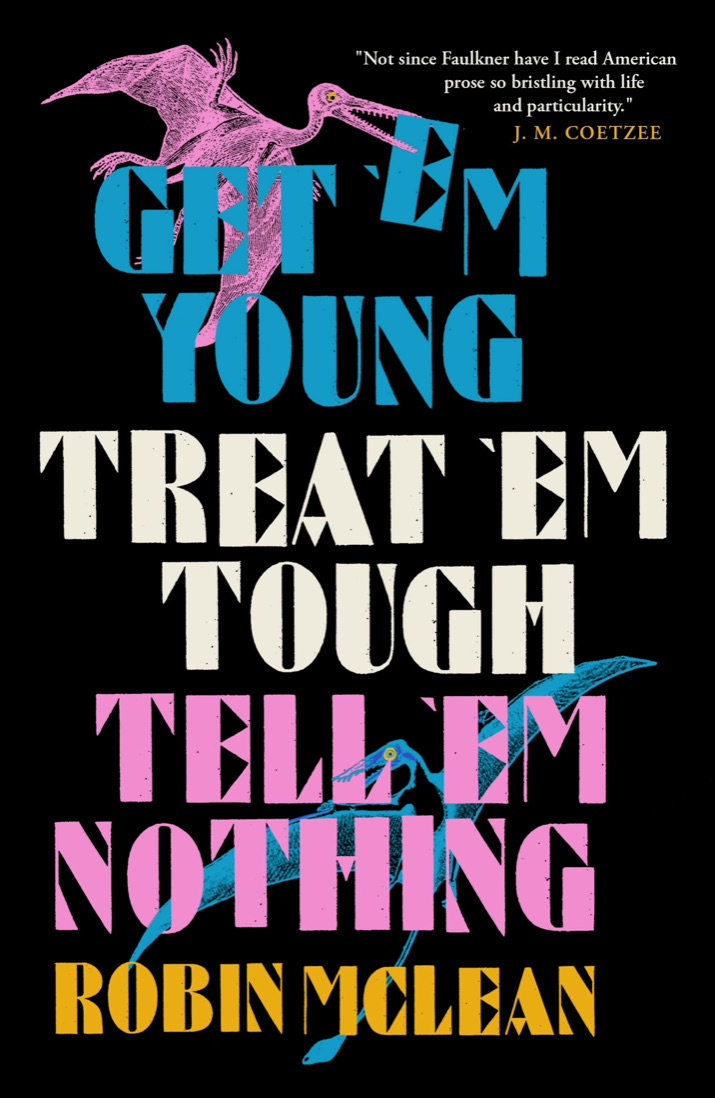 From the author of the acclaimed Pity the Best, a collection of new stories plumbing the depths of American laughter and evil.

Dark, profane and funny, yet ultimately humane, these ten stories are the latest and best of Robin McLean's reports from the eternal battlefront that is the contemporary United States. Each is a snapshot of the political, racial and sexual undercurrents roiling contemporary life; each finds a way into the nerves and blood beneath questions of power, trauma and oppression. Taken together, these stories march under the banners of Love and War, though the men and women in them aren't fighting a tangible enemy, but rather their own fear of slipping further through the cracks of their society.

Get 'em Young, Treat 'em Tough, Tell 'em Nothing marries the sardonic moral and political explorations of a Flannery O'Connor to the surreal wit of a Denis Johnson. It is a brazen State of the Union for a nation on the edge.

'Not since Denis Johnson's Jesus' Son have I read a book of stories that so resonated in my soul. McLean's prose sings with a fierceness that is ornate and sparse, spiritual and secular, peaceful and violent. These are stories that remind of Annie Proulx, Joy Williams, and Flannery O'Connor: surprising in the fundamental weirdness of mundane life pressed inextricably into the borderlands. The best collection of stories I have read in years.'

'I loved these brilliant, atmospheric and original stories - Robin McLean is such an exciting writer, and this is her best so far.'

'These stories, they churn and turn with ferocious pace and a brute subject-verb force. McLean is a writer of pure conviction, unafraid of risk, unconcerned with convention, objective but deeply humane, alive to wonder and strangeness. This collection, like her first, is beautiful and harrowing. I'll say it again and again: Nobody writes like Robin McLean.'

'Robin McLean has always excelled in narrators who communicate their own self-sufficiency even as they inadvertently reveal the extent to which they're actually barely holding it together. They live in places where a bed frame and box spring are just a dream. They remind us that they're still evolving . . . And yet somehow in the face of all of that, her protagonists summon lift, and generate that tenderness necessary to continue. The results are fictions that unite the personal and the political in ways that we need now more than ever.'

'Get Em Young is a series of dispatches straight from the trenches of modern survival, where no one secures the life they were promised yet they fight, flail, and flounder on all the same. Fusing severe wit and our crudest desires into the gritty, tender heart of human tenacity, McLean writes about enduring hope and disillusionment like no one else.'